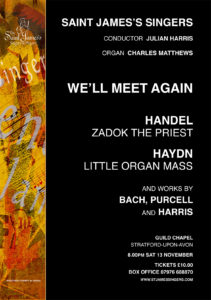 The Saint James’s Singers, under their conductor, Julian Harris, are delighted to launch their exciting new season, with a concert in the beautiful medieval Guild Chapel, Stratford upon Avon at 8.00 pm on Saturday 13 November.

The concert title echoes Her Majesty’s promise to us all that ‘we will meet again’ and, after this long period of quiet for all singers and audiences, the concert will aim to be uplifting and celebratory in tone, with a short period of reflection for what has been lost.

The concert will open and close with two of Handel’s joyous Coronation Anthems and will also feature a short motet by Bach, Haydn’s delightful Little Organ Mass, and two pieces from Purcell, including the ravishing final scene from Dido and Aeneas.

The concert will run for approximately an hour and a half without an interval.