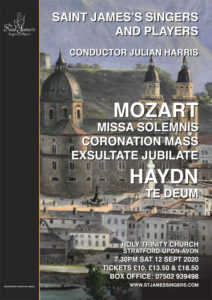 The opening concert of the 2020 Season BY Saint James’s Singers and Players has been postponed to Saturday 12 September when they will perform a sparkling programme of choral works by the eighteenth century’s most famous Austrian composers, Mozart and Haydn. The programme includes Mozart’s two final Salzburg masses – the Coronation Mass, K317, the Missa Solemnis K337 and the joyous  Exsultate jubilate, a brilliant operatic aria composed when Mozart was just sixteen. The final work is Haydn’s Te Deum for the Empress Marie Thérèse. This displays the freshness and vitality of a composing mind that was still at the height of its inventive powers. The piece is in the festive key of C Major and was composed for (and seemingly at the insistence of) the Empress Marie Thérèse, who was the wife of the Holy Roman Emperor, Francis II, and not to be confused with Maria Theresa who was Empress of Austria.