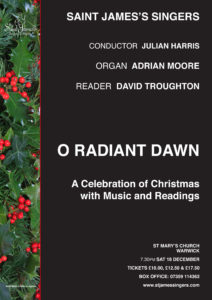 This year’s Reader is well-known actor David Troughton. Over a career spanning five decades, David has vast experience in television, theatre and film. He has worked at the National Theatre and in countless Shakespearean roles including Caliban in The Tempest and Bottom in A Midsummer Night’s Dream for the Royal Shakespeare Company. In January 2014, he took on the role of Tony Archer in the BBC radio series The Archers.
Readings will include extracts from A Christmas Carol and The Wind in the Willows as well as some inspiring poetry to capture the spirit of Christmas and to bring a smile to all.
After this difficult year, the music will bring out the joy and magic of Christmas. Carols will include McMillan’s compelling O Radiant Dawn, Rutter’s Star Carol and Julian Harris’s hilarious arrangement of The Twelve Days of Christmas which accompanies John Julian Norwich’s brilliant Thank You Letters. There will also be several favourites for the audience to join in.