Welcome to all the Pleasures 12 October 2019 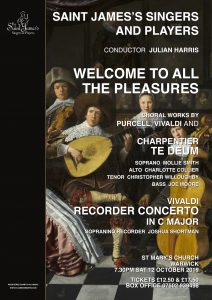 The concert’s principal choral work is Marc-Antoine Charpentier’s brilliant and dramatic Te Deum which, whilst composed in 1692, was only rediscovered in 1953. The instrumental prelude, Marche en rondeau, was chosen in 1954 as the theme music preceding the broadcasts of the European Broadcasting Union. Through this exposure it has become Charpentier’s best-known work.
Antonio Vivaldi brought to his sacred works an almost limitless melodic inspiration and an absolute mastery of orchestral colours and structures. His Magnificat in G Minor has these qualities in abundance. The same can be said for his Concerto for Recorder in C Major. The solo role is virtuosic and demanding.The pattern is classic Vivaldi: the two outer movements are dazzling display pieces with the central Largo an eloquent and highly expressive monologue.
There are also three shorter choral works by Purcell including Welcome to all the Pleasures. This was composed in 1683 and was the first of a series he wrote in honour of the patron saint of music, Saint Cecilia.