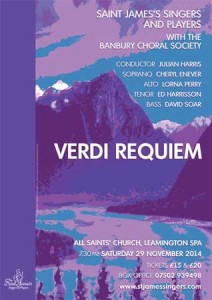 On Saturday 29 November the Saint James’s Singers and Players will perform Verdi’s Requiem in All Saints’ Church, Leamington Spa. Joining the St James’s Singers for this concert will be the Banbury Choral Society and the City St James’s Singers creating a choir of 150 voices to perform this monumental work. There is a stellar line up of soloists: Soprano – Cheryl Enever, Alto – Lorna Perry, Tenor – Ed Harrisson, and Bass – David Soar.

All but one of Guiseppe Verdi’s masterworks are operas. This poses a problem for those who are not opera buffs. Fortunately, though, that one exception is his stunning Requiem, into which he poured the same vibrant emotion that thrills opera fans. Indeed, there have been critics who have referred to Verdi’s Requiem as his “finest opera”, but the serious listener must surely recognise the sincerity of the music, albeit extremely dramatic in parts. The amazing range of contrasts and textures makes an unforgettable impression upon all who sing and play the work, and upon all who hear a live performance.

The concert is dedicated to the memory of Tim Britten, who was such a devoted and loyal Founder Friend of the Saint James’s Singers.

Click here for a seating plan of All Saints’ Church, Leamington Spa

(This is for information only and is not an indication of seat availability.)