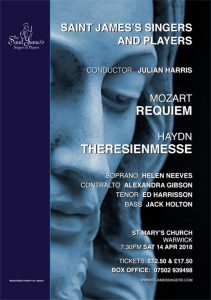 The St James’s Singers and Players present their first concert in 2018 at St Mary’s Warwick on Saturday 14 April. The works to be performed are Mozart’s Requiem and Haydn’s Theresienmesse. The concert starts at 7.30pm.

Mozart’s Requiem is a choral masterpiece but one shrouded in mystery. It was commissioned when he was terminally ill and he died before completing it. Who actually finished the work remains uncertain.

The Theresienmesse, which Haydn composed between completion of his two magnificent oratorios, The Creation and The Seasons was simply titled on the opening page with the one word “Missa”. The origin of the nickname remains a matter of conjecture, but it is usually attributed to the work’s supposed association with Maria Therese, the wife of the Emperor Franz II.