About the Saint James’s Singers 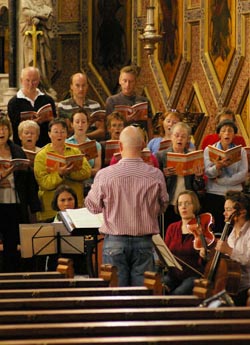 Julian Harris formed the St James’s Singers in 1985 when he was organist and choirmaster at St James’s Church, Alveston in Warwickshire. Since then, the choir has grown in size and stature to become one of the area’s leading ensembles. Over the last thirty years they have passed every major choral milestone from Bach’s St John Passion to Beethoven’s Choral Symphony. They have worked with many leading internationally established stars including Catherine Bott and Ian Partridge, and have worked with young soloists who have gone on to achieve worldwide recognition such as soprano, Carolyn Sampson, and tenor, Andrew Kennedy. The choir regularly performs in the Collegiate Church of Saint Mary in Warwick and in other local towns including Chipping Campden, Stratford-upon-Avon and Royal Leamington Spa.

With the lock-downs because of Covid 19 choirs, orchestras, and indeed audiences, have not participated in music-making since early 2020 and for most of 2021. But with the relaxation of regulations, the choir performed a concert at the Guild Chapel, Stratford upon Avon, in November 2021. The choir were also able to present their traditional Christmas Concert at St Mary’s Church, Warwick.

The choir has ambitious long term plans over the next four years. These include a Mozart and Haydn concert in late 2022 followed in the coming years by Bach’s St Matthew Passion, Elgar’s The Dream of Gerontius, and Bach’s B Minor Mass in a 40th Anniversary special concert. We have also re-arranged the cancelled visit to sing at St George’s Chapel, Windsor Castle. This will take place in July this year. And of course we shall present our traditional  Christmas Concerts and a small charity event each year.

The  2022 season opens on 21 May at St Mary”s Church, Warwick, with The Music of the Coronation – a concert of all the choral music at Her Majesty’s coronation in 1953.

The choir has members of all ages, and subscriptions are waived for those who are students or who are in full time education. Although the choir is based in Warwickshire, choir membership is drawn from London, Bristol, and from the South Coast to Birmingham and Coventry. The choir rehearses at St James’s Church, Alveston, on alternating Thursdays and Fridays. The current rehearsal schedule is published on the Members’ Page. The choir also performs at Weddings and private functions. 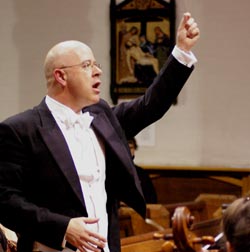 Julian conducts two choirs; the Saint James’s Singers and the Banbury Choral Society. He teaches A-Level/GCSE theory, piano singing, composition as well as the Kodaly Method. Former pupils have won Oxbridge Choral Scholarships, a scholarship to Lincoln Cathedral, and successfully auditioned for the Genesis Sixteen. They have made debuts at BBC Proms in the Royal Albert Hall, the National Youth Orchestra, and the Royal Welsh Conservatoire of Music.

Julian has toured Venice and played Vivaldi on Vivaldi’s organ in the Pieta – a particular highlight. He has conducted at Winchester Cathedral and Symphony Hall, Birmingham.

He has had a long and varied career embracing work at the RSC and Birmingham Repertory Theatre. He has played and conducted all over Europe including Saint Peter’s in Rome as well as in the country’s major halls, including the Queen Elizabeth and Cadogan Halls in London.

Julian is in demand in the Midlands and in London as a conductor, composer, arranger, accompanist and teacher. He has conducted the Saint James’s Singers in Evensong at both St Paul’s Cathedral and at Westminster Abbey.